This weekend I was in the Museum of Kiekeberg where we had a living history- event set in 1804. It was great fun :) My dear husband and I did portray showmen, we had a paper-theater with us and told some dances to the peasants.
By the way, this is the only museum in Germany with own living-history-interpreters! (We were only there as guests)
I made this little Video:
http://www.youtube.com/watch?v=MD30gy1k4HA
And a friend of mine this:
http://www.youtube.com/watch?v=5QHVCRKAi-0

I don't like to use lj for personal complainments, but in this case I just have to write this....

Since threequarters a year we are waiting for some rebuildings in our flat (the house belongs to my father and his brother and sister) , my uncle promised us to join our tiny flat with the other one on the floor which is abandoned since threequarters a year.
We were fed up and started to seach for a bigger flat, which we found some month ago. We will move at the 4th of april.
My super-duper-uncle who waited such a long time and put us off again and again did call my father this morning that we have to prepare our flat for building workers today that they will come in half an hour.
Since it was abandoned my father had allowed me to use the flat next to ours as a provisional atelier and now I had to take out everything I had in there! Our flat is very small and it was nearly impossible to get all this stuff in...

Ok, that was the first nice surpirse. The next was, that this workes would make the breaktrough the wall TODAY. My uncle told me that we just had to push the couch aside, and they would attach a foil on the wall, that there would be no dirt in our flat.
I was alerted and did not only push the couch aside but also did take most of our book from the shelf besides the couch and laid them on the couch putting the plaid over it.
My parents did collect us to take us with them that we didn't have to stay in all that  mess and noise, I took some stuff with me including my last two comissened dresses to store them at my parent's.

When we came home this evening I though this must be a bad nightmare!
All our flat was covered with a coat of white dust *scream*  I was so angry I could have choked my uncle. I called him emediately, nearly screaming in the phone...

What does he think??? Couldn't he wait with this just two weeks??? Than we would have been out of there and no problems would have happened.

We now stay at my parents for the night, tomorrow our sunday will be very funny... we have to clean EVERYTHING we have.

I'm so angry! I hoped so much, that I would wake up the  next moment and see that everything is just a nightmare... 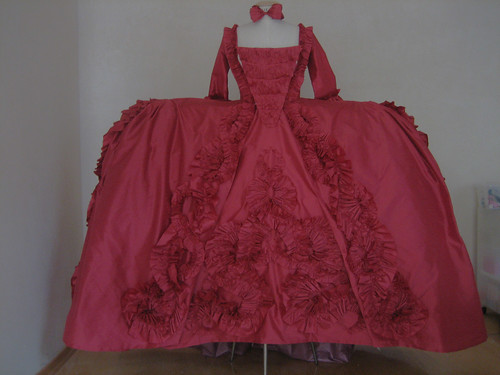 I recently finished a robe à la francaise with XXL-Pannier for a customer (she is much smaller than the dress-stand, she will be as high as broad...)

I have neglected LG too much the last time, I know.
So here is a summery of my recent projects.
I have begun to knit again - my husband says it's wool-madness.... but he benefits from it, I made a pair of 18th century stockings for christmas for him.
I also knitted a pair for my self. I'm not quite contend with them, as the clock turned out very strange...

I also began to practice embroidery again, I embroidered two drawstringbags, and began to embroider a waistcoat: 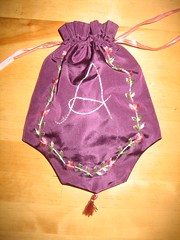 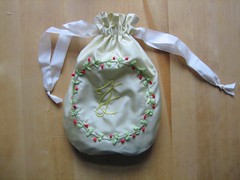 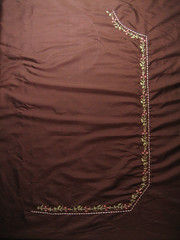 And at last, my homepage is ready, it was made by a friend of mine - I'm totally untalented in this subject ;)
By now it's in german only, sorry:
www.au-trait-galant.de

I wasn't online the last days, so this posting is a bit late. Fiofiorina already mentioned our 18th century weekend in Zeilitzheim ( www.barockschloss.de )
I have uploaded some pics and videos:

This morning I finished the waistcoat for which I made the deathheadbuttons some time ago:

A fellow-reenactor made a little video of your event in Kommern this spring:
http://www.youtube.com/watch?v=x8W9qm3PMTo " A prussian village in 1814" (you won't see me, but you will hear me singing ;)

Yesterday I finished the new Robe à la francaise for  de_montsoreau. She had given me a francaise which she had begun to sew herself but didn't had the time to finish it and had some difficulties with the fitting.

A film about the milliners shop in colonial Williamsbourgh:
http://www.youtube.com/watch?v=n_ILQunru60&feature=related